in iT news, Security

7 Easy Steps to Protect Yourself

Currently, there is no WannaCry decryption tool or any other solution available, so users are strongly advised to follow prevention measures in order to protect themselves.

Story of the virus;

In the wake of the largest ransomware attack in the history that had already infected over 114,000 Windows systems worldwide since last 24 hours, Microsoft just took an unusual step to protect its customers with out-of-date computers.

Microsoft has just released an emergency security patch update for all its unsupported version of Windows, including Windows XP, Vista, Windows 8, Server 2003 and 2008 Editions.

So, if your organization, for some reason, is still running on Windows XP or Vista, you are strongly advised to download and APPLY PATCH NOW!
WannaCrypt, or also known as WannaCry, is a new ransomware that wreaked havoc across the world last night, which spreads like a worm by leveraging a Windows SMB vulnerability (MS17-010) that has been previously fixed by Microsoft in March. 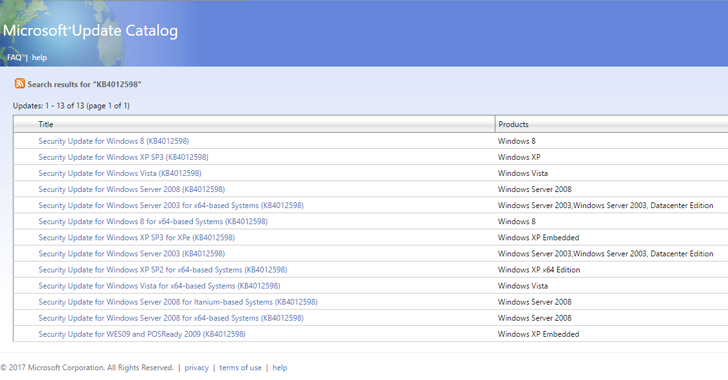 A large number of successful infections of the WannaCry ransomware at an astonishing pace concludes that either significant number of users have not yet installed the security patch released in March (MS17-010) or they are still running an unsupported version of Windows for which Microsoft is no longer releasing any security update.
Once infected, WannaCry locks files on the computers and requires victims to pay $300 in Bitcoins to get back the control of their systems, along with a threat to double the price to $600.
But there’s no guarantee of getting your files back even after paying the ransom.
How is WannaCry Spreading?
Such ransomware infection typically leverages social engineering or spam emails as a primary attack vector, tricking users into downloading and executing a malicious attachment.
WannaCry is also leveraging one such social engineering trick, as FoxIT researchers uncovered one variant of the ransomware that is initially distributed via an email containing a link or a PDF file with payload, which if clicked, installs WannaCry on the targeted system.
Once executed, the self-spreading WannaCry ransomware does not infect the targeted computers immediately, as malware reverse engineers found that the dropper first tries to connect the following domain, which was initially unregistered:

If the connection to the above-mentioned unregistered domain fails (which is obvious), the dropper proceeds to infect the system with the ransomware that would start encrypting files. But if the connection is successful, the dropper does not infect the system with the WannaCry ransomware module. A security researcher, tweeting as MalwareTech, did the same and registered the domain mentioned above, accidentally triggering a “kill switch” that can prevent the spread of the WannaCry ransomware, at least for now. Malware Tech registered this domain by spending just £10, which makes the connection logic successful. “In other words, blocking the domain with firewall either at ISP or enterprise network level will cause the ransomware to continue spreading and encrypting files,” Microsoft warned. If infected, the malware scans the entire internal network and spread like a worm into all unpatched Windows computers with the help of SMB vulnerability. The SMB vulnerability has been identified as EternalBlue, a collection of hacking tools allegedly created by the NSA and then subsequently dumped by a hacking group calling itself “The Shadow Brokers” over a month ago.
Resources: The Hacker News
Share
securityvirus

Meeting most successful women in tech

A thrilled client is the main goal and motivation behind every custom website design company.